The CCNA covers the subject below which candidate must know before the exam, Let go over them briefly.

Go get your Certification 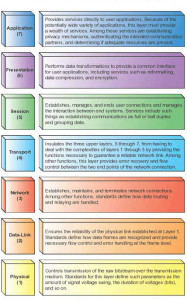 Each OSI layer contain a set of functions performed by programs to enable data to travel from a source to a destination on a network.

In this article I will provide brief descriptions of each layer in the OSI reference model.

The application layer protocols that you should know are as follows:

The session layer establishes, manages, and terminates sessions between two communicating hosts. It provides its services to the presentation layer. The session layer also synchronizes dialogue between the presentation layers of the two hosts and manages their data exchange. For example, web servers have many users, so many communication processes are open at a given time. Therefore, keeping track of which user communicates on which path is important.

The transport layer is possibly the most important layer for exam study purposes. A lot is going on here, and it is heavily tested.

TCP
TCP is connection oriented protocols. Connection-oriented transmission is said to be reliable. Thinks TCP as registry AD facility available in Indian post office. For this level of service, you have to buy extra ticket and put a bunch of extra labels on it to track where it is going and where it has been. But, you get a receipt when it is delivered, you are guaranteed delivery, and you can keep track of whether your shipment got to its destination. All of this costs you more—but it is reliable!

UDP
UDP is connection less protocols. Connection-less transmission is said to be unreliable. Now, don’t get too wrapped up in the term “unreliable” this doesn’t mean that the data isn’t going to get there; it only means that it isn’t guaranteed to get there. Think of your options when you are sending a postcard, put it in the mailbox, and chances are good that it will get where it’s supposed to go—but there is no guarantee, and stuff does go missing once in a while. On the other hand, it’s cheap.

The transport layer can use two basic flow control methods:

When reliability is necessary, it should cover these four items:

Transport layer assigns a unique set of numbers for each connection. These numbers are called port or socket numbers. TCP, and UDP, provide a multiplexing function for a device: This allows multiple applications to simultaneously send and receive data.
Imagine a server that performs a number of functions—for example email, web pages, FTP, and DNS. The server has a single IP address, but can perform all these different functions for all the hosts that want to connect to it. The transport layer (layer 4) uses port numbers to distinguish between different types of traffic that might be headed for the same IP address.

Port numbers are divided into ranges by the IANA. Following are the current port ranges:

The network layer provides a logical topology and layer-3 addresses. Routers function at the network layer. This layer is responsible for three main functions:

IP packet
Where the transport layer uses segments to transfer information between machines, the Internet layer uses datagram’s. Datagram is just another word for packet.

The IP protocol is mainly responsible for these functions:

Two types of packets are used at the Network layer: data and route updates.

Public addresses are Class A, B, and C addresses that can be used to access devices in other public networks, such as the Internet. Public IP address assign authority The Internet Assigned Numbers Authority (IANA) is ultimately responsible for handing out and managing public addresses. Normally you get public addresses directly from your ISP, which, in turn, requests them from one of five upstream address registries:

Private ip address can be used to configure private network. You can use private ip to build your network without paying a single rupees. But one biggest problem with private ip is that with private you can not access the internet. This is the point where ISP comes from. ISP purchase a bulk of public ip address and provide them on rent. Whatever you pay to ISP for accessing internet is actually the charge of using public ip address.

There are two specifications of Ethernet frame Ethernet II and 802

802.2 use a SAP or SNAP field to differentiate between encapsulatedlayer-3 payloads.

With a SNAP frame, the SAP fields are set to 0xAA and the type field is used to indicate the layer-3 protocol. One of the issues of the original SAP field in the 802.2 SAP frame is that even though it is eight bits (one byte) in length, only the first six bits are used for identifying upper-layer protocols, which allows up to 64 protocols.

The Physical layer communicates directly with the various types of actual communication media. Different kinds of media represent these bit values in different ways. Some use audio tones, while others utilize state transitions—changes in voltage from high to low and low to high. Specific protocols are needed for each type of media to explain the proper bit patterns to be used, how data is encoded into media signals, and the various qualities of the physical media’s attachment interface.

Two types of fiber are used for connections: multimode and single-mode.

Multimode fiber
has a fiber thickness of either 850 or 1300 nanometers (nm), and the light signal is typically provided by an LED. When transmitting a signal, the light source is bounced off of the inner cladding (shielding) surrounding the fiber. Multimode fiber can achieve speeds in the hundreds of Mbps range, and many signals can be generated per fiber.

Single-mode fiber
has a fiber thickness of 1300 or 1550 nm and uses a laser as the light source. Because lasers provide a higher output than LEDs, single-mode fiber can span over 10 kilometers and have speeds up to 100Gbps. With single-mode fiber, only one signal is used per fiber.

Two main standards are used to describe the transmission of signals across a fiber:

SONET is defined by the Exchange Carriers Standards Association (ECSA) and American National Standards Institute (ANSI) and is typically used in North America.

SDH is an international standard used throughout most of the world (with the exception of North America). Both of these standards define the physical layer framing used to transmit light sources, which also includes overhead for the transmission.

The core provides a high-speed layer-2 switching infrastructure and typically does not manipulate packet contents.

The distribution layer provides a boundary between the access and core layers. It contains routers and switches. Routers are used to provide the logical boundary–broadcasts are contained within the access layer and Filtering policies can be implemented to restrict traffic flows.

The application layer handles high-level protocols, including issues of representation, encoding, and dialog control. The TCP/IP model combines all application-related issues into one layer and ensures that this data is properly packaged for the next layer.

The transport layer deals with QoS issues of reliability, flow control, and error correction. One of its protocols, TCP, provides for reliable network communications.

The purpose of the Internet layer is to send source datagrams from any network on the internetwork and have them arrive at the destination, regardless of the path they took to get there.

The name of this layer is broad and somewhat confusing. It is also called the host-to-network layer. It includes the LAN and WAN protocols and all the details in the OSI physical and data link layers.

This section would introduce subnetting. You will be able to subnet a network in your head after going through this section. In addition, you will learn about Variable Length Subnet Masks (VLSMs) and how to design a network using VLSMs. This would finish with summarization techniques and configurations.

This section introduces you to Cisco equipment. In this section you will learn how to connect to it and make initial configurations, as well as how to connect it to other devices to build a network. You will review the different types of network connections available, with particular emphasis on those that are tested in the CCNA exams. You will also look at where a Cisco device stores the various files it needs to operate, the files needed for the boot process, and the backup and restoration of system files

Cisco devices are very costly. For exam preparation you could use simulators. Several simulators are available choose one that best suites you. We would packet tracer for configuration.

Use the CLI to discover neighbors on a network

Describe how and when to implement and verify VLANs and trunking, and then implement them on the network

Describe situations in which a spanning tree is used, and implement it on the network

Describe situations in which security is required at Layer 2, and implement it on the network

This section introduces the components of a VPN solution for WAN connectivity, explains how to configure a PPP connection, and describes Frame Relay operation, configuration, and troubleshooting.

The most important drawbacks to IP version 4 (IPv4) is the limited number of unique network addresses; the Internet is running out of address space.

IPv6 is the long-term solution. By increasing the size of an IP address to 128 bits, IPv6 increases the total number of addresses that are available. This section discusses both solutions.

No matter for which certification are you preparing IPv6 has become the essential part of all major certifications. In order to get IT certification you must be familiar with IPv6. With a complete series of article on ipv6 tutorials we have tried our level best to give you whatever universal certifications require from IT professionals.

Differences between IPv4 and IPv6

How to configure IPv6 Address

How to assign IPv6 address in Server 2008

How to configure Cisco Router with IPv6

How to configure routing with IPv6 step by step guides

Describe the purpose and types of dynamic routing protocols

Describe the operation and implementation of distance vector routing protocols

Describe the operation and implementation of link-state routing protocols

How to configure router step by step guide

How to configure Cisco router in CCNA step by step guide

How to configure Static Route on router

How to configure EIGRP with RIP on same network

In this section we will introduces Wireless LAN (WLAN) technology. We will discuss the standards associated with WLANs, how WLANs are deployed and the basics of how they operate, security threats specific to WLANs and measures to mitigate them, and the essential steps to connect and configure an access point (AP) and a client.

How to Configure Wireless Network Step by Step guides

For this reason, Cisco expects you to have a general understanding of network security.

In section we would cover following topics

Go get your Certification

The CCNA program was created to provide a solid introduction to the Cisco Internetwork Operating System (IOS) and Cisco hardware. Cisco certification programs can help networking professionals succeed as they pursue their careers.